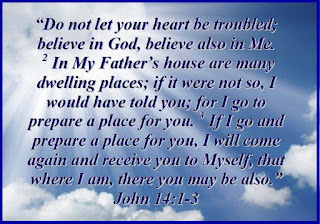 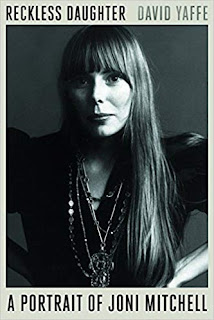 
This volume, by David Yaffe, professor of humanities at Syracuse University, is largely based on a series of interviews with Joni Mitchell and other musical colleagues, friends and enemies of Joni in the music industry, and others, over the course of several years up until 2015. Yaffe, of course, consults other written sources as well.


Roberta Joan Anderson was born in Fort Macleod, Alberta, the daughter of Myrtle McKee a teacher and William Anderson a military man and later a grocery store executive. She was an only child.


Joni discovered at an early age that she thought her parents had bad judgement, were rather conservative, and lacked vision.


In her early years she lived in Maidstone, North Battleford, and Saskatoon—all in Saskatchewan.


She was critical of the academic system—hated learning by rote, and said teachers taught students what to think rather than how to think. Her favourite things were dancing and art.


Although she was not involved in music at an early age; she had friends who were and she attended music festivals which they participated in; and she developed the capacity to analyze music by observing judges.


As a Sunday School student Joni was sceptical about the Bible. Her Sunday School teacher couldn’t answer her question: “Who was Cain’s wife?” She thought there were things missing in the biblical stories—that they were somehow incomplete.


In school, most likely her favourite teacher was Arthur Kratzmann. He taught in a rather unorthodox way. However, even though he had perhaps higher expectations of Joni and was critical of her work; it was because he thought she had much potential as a writer.


When she was ten, Joni was diagnosed with polio and spent some time in a Saskatoon polio colony. The polio strengthened Joni’s endurance and determination to defeat it. Enduring and overcoming polio may have led Joni to identify with the biblical story of Job—whom she eventually wrote a song about on her Turbulent Indigo album, called “The Sire of Sorrow (Job’s Sad Song).”


While in high school Joni became a bit of a tomboy and started to play a ukulele, which her friends hated.


After high school Joni studied for a year at Alberta College of Art and Design in Calgary. She got pregnant and gave birth to a daughter out of wedlock. She eventually agreed to sign the papers to let her child be adopted.


She moved to Toronto, met and married Chuck Mitchell; and began to write and sing at various venues. She divorced Chuck Mitchell and continued to improve as a singer-songwriter and ended up in the United States.


Judy Collins recorded Joni’s songs and introduced Joni and Leonard Cohen at the Newport Folk Festival. Joni had an affair with Leonard, and later an affair with David Crosby.


Yaffe, through a series of interviews with Joni and several other musicians provides the historical contexts, influences, experiences, etc., behind Joni’s songs and albums. He provides detailed accounts of the process of recording albums.


Many musicians recognized and praised Joni as a brilliant, gifted singer-songwriter—indeed, even the word genius has been employed to describe her music.


The irony however is that: “Joni thought of herself as a painter first, a musician second.” (p. 86)


Crosby, Stills and Nash were formed in Joni’s living room house in Laurel Canyon. Joni and Graham Nash were in love with each other; Nash wanted to marry Joni; but she broke away from their relationship because she feared ending up in a traditional housewife role and her music career would suffer or even end.


Joni’s Blue album has become her best selling one—over 10 million were sold in the U.S. alone. On it, she bares her soul and is perhaps most confessional of all her albums.


After her Blue album, Joni was still struggling with depression, and she bought a stone cottage on British Columbia’s Sunshine Coast—living a quiet, reclusive life for a year. Here she wrote songs for her For the Roses album.


Joni’s next album, Court and Spark moves in a different direction from her previous albums. In Court and Spark, Joni’s songs reflect influences of jazz and blues. The album sold over two million copies in its first year.


Over the years Joni has produced a brilliant, creative open tuning method of sound that has influenced and inspired many musicians as well as attracted many listeners to her music. Although she was popular as a folk singer-songwriter, Joni also experimented and developed her career in the genres of jazz, techno-pop, electronic and rock.


Joni’s successful career as a singer-songwriter has come at a cost. She has suffered the pain of broken relationships; in the past she was addicted to cocaine; she smoked four packages of cigarettes a day and lost her soprano voice; in 2015, she was unconscious with an aneurysm and had emergency brain surgery; among other factors.


Although I appreciated many of the stories behind some of Joni’s songs and albums and the research involved in including them in this volume; occasionally I felt Yaffe focussed more on others’ perceptions of Joni than Joni’s own point-of-view. It also seemed that at times Yaffe went overboard with the name-dropping game leaving this reader wondering why. One further critique: Yaffe’s written sources at times seem to be rather sparse and dated. For example, I was at a loss to find any up-to-date written material sources cited by Yaffe in the last couple of chapters.


All things considered, Reckless Daughter: A Portrait Of Joni Mitchell is a worthwhile read—profiling one of the most gifted, authentic, rebellious and creative musicians of our time.
Posted by Dim Lamp at 1:12 PM No comments: Links to this post

For: The Weekend in Black & White
Posted by Dim Lamp at 12:46 PM 6 comments: Links to this post

My New Book: Praying The Lectionary Cycle A

Please check out my new book Praying The Lectionary: Prayers Of The Church Cycle A, available for purchase from the CSS Publishing Company. This resource is for pastors and those responsible for preparing the Prayers of the Church for Sunday Worship. The lectionary readings are also listed for each Sunday of the church year. The prayers may be used as is, or edited to meet the needs and context of the worshipping community.
PLEASE NOTE, my correct bio is as follows: Garth Wehrfritz-Hanson attended and received his Bachelor of Arts from the University of Saskatchewan, Saskatoon, Saskatchewan and his M. Div. degree from the Lutheran Theological Seminary in Saskatchewan, Canada. He recently retired as the chaplain at Bethany Meadows in Camrose, Alberta, Canada. He enjoys hiking, bicycling, traveling, reading and amateur photography. He is married to Julianna who is also a Lutheran pastor. Click here or on the image to view further information and purchase. 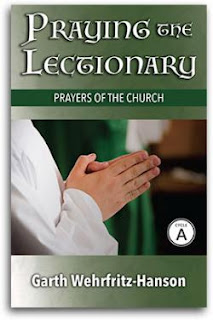 Posted by Dim Lamp at 8:43 AM No comments: Links to this post 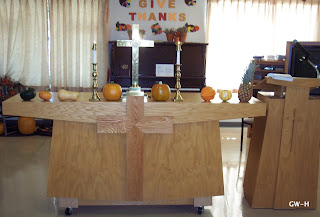 Believe it or not, Thanksgiving in Canada, or at least the land that would become Canada, has its own history, separate from our American counterparts.
Traditions of giving thanks long predate the arrival of European settlers in North America. First Nations across Turtle Island have traditions of thanksgiving for surviving winter and for receiving crops and game as a reward for their hard work. These traditions may include feasting, prayer, dance, potlatch, and other ceremonies, depending on the peoples giving thanks.
When it comes to European thanksgivings in Canada, we have a few tales to tell.
To read more click here: https://www.canadashistory.ca/explore/arts-culture-society/the-history-of-thanksgiving-in-canada

You might also want to read more about Thanksgiving from one of my previous blog posts here: https://dimlamp.blogspot.com/2016/10/clergy-comment-article.html

Happy Thanksgiving to all of my Canadian readers!
Posted by Dim Lamp at 10:30 AM No comments: Links to this post

For Wordless Wednesday
Posted by Dim Lamp at 12:19 PM 5 comments: Links to this post 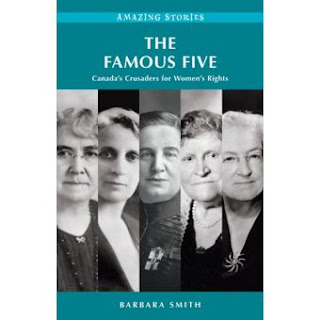 Most Canadians, I hope, have heard of the Famous Five. There are statues of them in Edmonton, Calgary, Winnipeg and Ottawa.
These five women, although born and raised in various places, eventually all ended up living in Alberta. They were socially active and politically progressive for their time; which is a bit of an irony in that Alberta is one of the more conservative provinces in comparison with some of the others.
Emily Murphy was perhaps the most outspoken of them, and regarded as the leader. Ironically, she was appointed as a judge, even though she was not trained as a lawyer. However, she did develop significant knowledge of the law and was most instrumental in getting the Persons Case to the Privy Counsel—which ruled that women were persons under the BNA Act, and hence entitled to the same political positions as men, including to sit in the Senate. Shortly after Lord Sankey’s ruling, Prime Minister Mackenzie King, in February 1939, appointed Cairine Wilson to the Senate. Emily Murphy, deeply desiring to be appointed to the Senate, was never chosen. It was not until 1979 however, that Alberta’s first female senator was appointed by Prime Minister Joe Clark, she was Martha Bielish. In 1979, to mark the 50th anniversary of the Persons Case decision, October 18 is now observed as “Persons Day” in Canada.
All five women Emily Murphy, Nellie McClung, Henrietta Muir Edwards, Louise McKinney, and Irene Parlby were committed advocates for women’s right to vote, more just legal rights for women concerning marriage, divorce, adoption, property rights, dower rights, protection of children, minimum wage agreements, widow’s allowances, and the temperance movement. Another woman and feminist who may be considered “the sixth member of the Famous Five” was Alice Jamieson, a Calgary judge.
Of the five women, three were elected to Alberta’s legislative assembly—Louise McKinney, Irene Parlby and Nellie McClung. McKinney was the first female parliamentarian in the British Empire. Irene Parlby was reluctant to become involved in politics, yet she was a well-respected MLA from 1921 to 1935.
Henrietta Muir Edwards helped in founding the National Council of Women of Canada, the Victorian Order of Nurses, and the Young Women’s Christian Association.
Nellie McClung was the author of over a dozen books, went on travelling tours promoting them, a church elder, the only female delegate at the 1938 League of Nations convention in Geneva, Switzerland, and was appointed to the first board of directors of the Canadian Broadcasting Corporation.
There is, of course, a propensity to idealise people who are famous. However, according to Smith: “...the Famous Five were staunch supporters of eugenics.” (p. 101)
Smith has provided readers with a valuable history of the Famous Five, her Bibliographical Essay and References are most helpful for those who would like to do further reading and research—including Books by the Famous Five.
Posted by Dim Lamp at 3:56 PM No comments: Links to this post

Dim Lamp
I am, among other things, a baptized follower of Jesus, a retired Lutheran pastor and chaplain, a husband, and a dad. 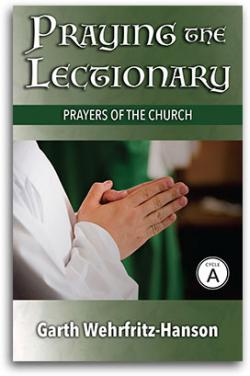 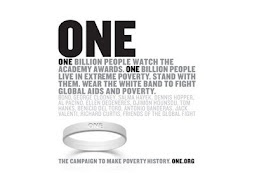